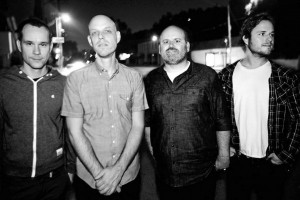 Since knapsack‘s inception in 1994 they have worked hard to solidify their place in the music scene. During their time together they have helped establish a new genre of music and influenced a group of younger bands that have recently gained attention. Nevertheless, even while being tagged “Emo Core” and being a part of the post-hardcore scene from the beginning, they have always been outside of the boundaries of the Emo sound and have many varied influences to their music. “I don’t like to call what we do ’emo core'” states singer/guitarists/songwriter Blair Shehan, “I think we make dark, hard-rocking music with a hook and varied dynamics.

Good or bad songwriting is good or bad songwriting silly category names aside”. knapsack has always placed quality songwriting above everything else. With the release of their third album “This conversation is ending starting right now”, knapsack have matured as a band and broadened the sound of the genre they helped to develop. The songwriting on “This conversation” shows not only the development of the band but also their penchant for the experimental, all while retaining their trademark sound. “We’re a lot older” notes Shehan. “The first record was like ‘wow, we can make records.’ We starved to make the second one better. With the third, we just wanted to finally take some chances.” Evidence of this new direction can be found in the use of Cello, Piano, Organ and even Slay Bells. Don’t worry though, there’s still enough of the gut wrenching vocals and driving hooks to convince even the most jaded listener to accept what their many fans already know that this is one of the most exhilarating new rock bands out there today.

For additional information on Knapsack please visit the links below: