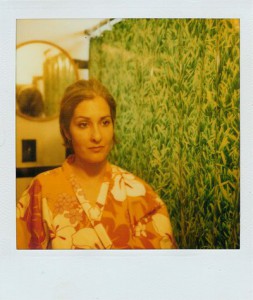 When I was little I discovered that the only people having fun in the world were the people on record covers” says Lida Husik. “I wanted to run around with the Beatles but I thought I should change my name to Linda Hughes or Penny Lane or something.” The name has stuck, but the music has taken many turns, from post-punk grunge to psychedelic pop to electronica and back again. On the seven records that preceded “Faith in Space”, her songs overflow with pop-smarts and head-filling rhythms. Husik’s songwriting craft has been mastered over eight years of recording, beginning with the seminal New York indie label, Shimmy Disc Records, home of Ann Magnuson’s Bongwater. There she completed three albums(“Bozo”, 1991, “Your Bag”, 1992, and “Red Emma”, 1993) with about four days allowed in the studio for each. The only instrument she didn’t play was drums, getting help from Bongwater’s David Licht and Brit pal Jamie Harley.

By 1994, Husik was signed to a joint deal with both Caroline Records, and it’s electronic imprint, Astralwerks, famous for breaking such electronic acts as The Chemical Brothers, Fatboy Slim, Gearwhore, m -ziq and various AMP Dance Compilations. For Caroline, she teamed up with Charles Steck and “the Rummager” (the original rhythm section behind Don Fleming’s Velvet Monkeys and Gumball) and released “Joyride”, a critically acclaimed album featuring eloquent, subtle lyrics sung in the somnolent tones that have become her trademark. Then, just as the first wave of female singer- songwriters behind her threatened to swallow her up into a funnel of estrogen, enter one Beaumont Hannant.

“Up there with Aphex Twin, Luke Vibert, and m -ziq, he has been one of the most influential technicians in the British electronic underground” (Trance Europe Express). As half of the team known as Outcast Productions, he remixed Bjork’s “Hyperballad” and played live with her at the Phoenix festival and on “Top of the Pops” in England. Aside from his remix work, Hannant has released three full-length solo records on General Production Recordings, and a full-length album with Outcast Productions on One Little Indian Records, U.K. In an interview in “Select” magazine, Hannant was asked what vocalist he’d like to work with, and he replied, “Lida Husik”. Within the year the two had paired up in York, England to record three tracks for his full-length, “Sculptured”, and a cooperatively released five-song E.P. entitled “An Evening at the Grange” for Astralwerks in 1994. The collaboration was ideal. Husik had been using samples and hip-hop beats as far back as “Bozo”, and her smooth vocal harmonies and lush guitar blended beautifully with Hannant’s electronic soundscapes.

They teamed up once again for a full-length album called “Green Blue Fire”, releases on Astralwerks in 1996. Parts trip-hop, ambient, and break-beat, “the result is a warm, accessible album, free of the chilliness traditionally associated with electronica; shimmery layers of ethereal sound laced with Husik’s intimate vocals which dip and soar according to the song’s mood.” (Rolling Stone)

In 1997, Lida moved from New York City to Los Angeles, California. Signed to Alias Records in L.A., Lida decided to forego another East Coast winter. She teamed up with Steck and the Rummager again for 1997’s “Fly Stereophonic”, a hook-laden album of “altered-consciousness pop” (Entertainment Weekly), but decided not to tour the record in favor of getting back to the studio. The latest incarnation, “Faith in Space” was recorded at her home in Silverlake, CA. The album features Beaumont’s deep, soulful beats and samples and Lida‘s guitars, bass and vocals. Faster than their previous work and encompassing trance, dance, and trip-hop, the album standouts in its blend of songwriting and electronic production by two artists whose credibility in both genres is unmatched.