“Now’s the time to catch up with one of the few songwriters expanding the tradition of Lou Reed, Bob Dylan and Pete Townshend for the 90’s.” CHICAGO TRIBUNE 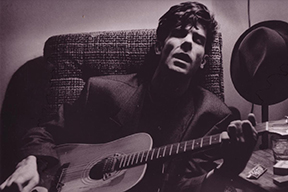 Nineteen ninety-eight ended with Paul K’s A Wilderness of Mirrors taking the #2 spot on the Pulse! Rock/Pop Top 10 Prime Cuts for ’98. In nineteen ninety-seven Love is a Gas was on both The Chicago Tribune and The Austin American Statesman’s “Best Of” honors. In fact, Love is a Gas was #1 at The Statesman and #2 at the Tribune, second only to Radiohead’s O.K. Computer yet edging out Bob Dylan’s last release. Paul’s latest self-produced release, Saratoga is the best opportunity to date to discover what all the fuss is about. It is Paul’s most pop effort to date, combining boozy rhythms and blues with dashes of classic soul while retaining K’s trademark clenched teeth sense of desperation.

“Paul K. is one of the post-punk generation’s first bona fide bluesmen, a guy whose tales from the darkside are drawn from personal experiences as a reformed junkie and small time criminal with the jailhouse record to prove it. Told with a novelist’s eye for detail he never makes the mistake of substituting atmosphere for insight.” TROUSER PRESS

Paul’s songs dramatically reflect the challenging life he has led. The singer draws from his experiences on the streets, beautifully weaving his emotional insight into every note and lyric. Unsentimental though it may be, Paul observes the world through unflinching eyes. His lyrical content is colorful and vivid and ranges from political to personal, somber to spiritual. His last release A Wilderness of Mirrors told the story of Al Broadey and his wife Anne, farmers in the 1940’s. The tale, based on the book of Job was uplifting and thrilling, a 17-song, 63 minute epic.

“If Love Is A Gas – a chilling meditation on romance, betrayal and moral decay – was a mile stone for the prolific cult figure, then the ambitious song cycle – A Wilderness of Mirrors (complete with faux-soundtrack-album packaging) is his magnum opus.” PULSE!

This gifted songwriter smoothly transverses musical genres: acoustic country-tinged folk, potent gospel (religious themes run through his music), blues and flat out rock ‘n roll. His lyrical composition has literary tendencies, rife with nods to writers like Jim Thompson, Richard Hell and Jim Carroll. Paul’s artistic proficiency is boundless having written well over 1000 songs and releasing 16 records in as many years. Paul toils away for love, definitely not money, having remained well below the public’s radar screen even though he’s been heralded by critics as “one of his generations most compelling songwriting voices”. ENTERTAINMENT WEEKLY

Paul K. is one of our dark, yet great, Americana songwriting resources.” RAYGUN

Detroit born, and currently Kentucky based, Paul started recording his music for mass consumption in 1983. When not writing songs he spends time on the road touring with friends such as Elliot Smith, Wilco, Palace Brothers, Richard Thompson, Guided by Voices, Mark Eitzel and The Afghan Whigs. At a time when every group is struggling to keep up with the latest trend, Paul K. keeps it real and sounds more vital than ever, especially on the blues soaked Saratoga. He may not be a boxcar-riding troubadour, but he is just about the only credible proponent of impeccable craftsmanship and spokesman for the human psyche. For that alone he should be revered.

For additional information on Paul K please visit the links below: