Scourge of the sea 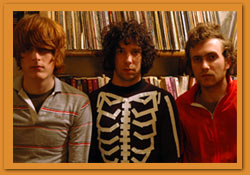 The Scourge of the Sea writes sweet golden pop music. Swiftly tilting songs surround ghostly melodies, jangly hooks and recall the cover and comfort of darkness from the first time you saw the ocean, the first time you got lost and the first time you lost. Smart and literate songwriting coupled with dreamy, atmospheric arrangements don’t displace simple sing-a-longs over fractious electric guitars.

Living in the heart of downtown Lexington, Ky, The Scourge of the Sea features Andrew English, Justin Craig and Robby Cosenza (currently of the Apparitions and formerly of Pontius CoPilot-recently named one of Kentucky’s top 10 in Filter magazine alongside Will Oldham, My Morning Jacket, Slint and Loretta Lynn) Since forming in the winter of 2004, the band has continued to maintain an increasingly loyal and healthy following on their own, from rock clubs to art galleries, attics to festivals. 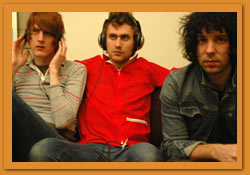 The Scourge of the Sea has recently shared bills with Stars, Fruit Bats, Paleo, Langhorne Slim, Marbles, Rogue Wave and Clem Snide. The band’s releases include a vinyl demonstration single out on Paper Records and the upcoming full-length album, Make Me Armored, available July 2006 from independent mainstay Alias Records.