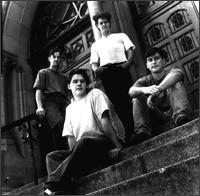 Since the band’s inception in 1990, it has remained Throneberry‘s ultimate goal to produce a “classic”, a “five star” type of album. A Doolittle or a Village Green Preservation Society: A top to bottom record with enough candy to get the kids rocking, but with enough substance to last beyond the initial rush. It’s an impressive aim in today’s musical climate of disposable singles and manufactured successes (see Backstreet Boys, N’Sync), yet it’s one Throneberry have stuck to. With the release of 1998’s “Squinting Before the Dazzle”, evidence suggests they are closing in on their goal.

“Squinting Before the Dazzle” rocks, especially at the top, but that’s not the whole story. Don’t let the unmistakable hooks in “Summerschool” and “Let’s Hear it for Decay” distract you from the depth and soul of this record. Sure their endless battalions of guitars hit pretty hard, but it’s what you won’t hear on the radio that makes “Squinting” so special. Lyrical spins on desperation, deceit, and departure from headwriters Arbenz and Womelsdorf are what distinguish this band. That and the vast musical terrain explored with the help of producers Joe Chiccarelli and Chris Fuhrman. Of course, it wouldn’t be a Throneberry record without it’s soft white underbelly of soul-baring vulnerability, but it wouldn’t be a new Throneberry record without an expanded musical palette which this time features trumpets, flutes, lots of electric pianos and drum loops.

Drawing their moniker from the surname of the unfortunate 1962 Mets first baseman, the Cincinnati quartet’s debut “Sangria” and follow up release “Trot Out The Encores” caught the ear and pen of various individuals. In 1994, the opening strains of “Touched” on their Greg Dulli (Afghan Whigs) produced debut, “Sangria”, announced their bid for greatness, by declaring “the hand of greatness has selected me.” However, “Touched” also hinted at a curse of some kind, “some mad malevolence has branded me.” That dichotomy has been central to Throneberry‘s career. Melody Maker deemed their debut “…practically boozy with great songs” and called the single “Touched” both “tense and soaring”. Spin cheekily commented that Throneberry opts for “songwriting — the ultimate rock pretension”.

While fans and critics have consistently praised the work, the band has striven to surpass expectations and push their boundaries with each release. Throneberry spends most of its time on the road, opening nationally for Lush, Weezer, Ass Pony’s and Magnapop and regionally for Urge Overkill, Grant Lee Buffalo and the Meat Puppets. In March and April of 1996 the band opened for the Afghan Whigs’ in Europe. All in all, everything the band has achieved has been more than the boys realistically expected.

And so, “Another windy lap” is how the title track on “Squinting Before the Dazzle” opens, with the band anxiously poised for another go ’round. If the last few years have felt a bit like running directly into the wind, the hope is that a new turn with a striking new record may provide the men of Throneberry a well-earned lift from a benevolent tailwind. Either way they achieved what they set out to do.